Distinguishing the quality of software business is an important skill for investors, engineers, and executives. As software gets more critical in the industry, value investors cannot ignore this intangible sector anymore and should establish valuation models vastly different from the physical world. Likewise, engineers need to understand how their contributions are tied to business value to be impactful. Of course, valuation is always art rather than science, and you need both quantitative and qualitative judgment, but this series suggests aspects that can help build your mental model.

The list of the most valuable companies clearly shows the importance of software: Apple ($2.2T), Microsoft ($1.7T), Google ($1.3T), Amazon ($1.1T), Tesla ($640B), and so on. Yet, despite the importance, the market is still unsure how to value software business. As a result, in 2022, we are witnessing a drastic change from unreasonable optimism to pessimistic hopelessness (again).

Fundamentally, the software business is “scary” as those companies own very few physical components you can point at. For example, GitLab reached a $15B valuation after IPO, but their S-1 didn’t even have an address because the company is remote-only. The company has negligible assets besides cash: property and equipment are only $5M. It was never profitable with an accumulated deficit >$.6B. You may want to say its code is the most valuable asset, but even that is open to the public. It is hard to predict how this specific business will prosper, but those intangible businesses will surely represent more market value in the next decade (unless nuclear wars push humanity back to prehistory). So then, how should we reason about such businesses? 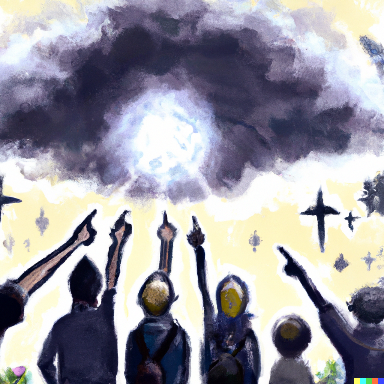 To give us some calm, it is worth noting that the larger transition toward an intangible economy has been ongoing much longer – ever since the Bretton Woods system ended in 1971, even the mighty US dollar had no physical backing. So, instead of being scared of new dynamics, it’d be wiser to evolve our mental models to embrace changes. The model should help us to navigate through dramatic changes with a long-term focus and not be distracted by continuous noises. Over a decade, I’ve been iterating with my mental model of software business to make critical decisions like investing, immigrating, switching jobs, and designing software solutions. The model is rudimentary but can still provide useful insights, so here we go.

Strategy is a sequence of 1) interpreting the past, 2) predicting the future, and 3) executing now. So, let’s start with a bit of the stock price history before building a model. Even though the price can fluctuate widely far from the value, it still provides a valuable view because the past is “fixed” and doesn’t require complex interpretation.

At the dawn of the internet business around 2000, the market was overly excited about it and pumped valuations to the sky. Many turned out to be unsustainable and phased out (e.g., pets.com), but even solid businesses were dramatically affected. For example, Amazon’s stock price dropped over 95% from $113 to $5.51 (pre-split), which would’ve been an outstanding stock for the next two decades. Cisco is another intriguing example as it became the most valuable company with a $546B valuation but never recovered the peak until now.

Since 2012, when Facebook IPOed with a $100B valuation and the explosive growth of smartphones became more apparent, the market started to appreciate the power of the software business again. The trend continued until the end of 2021, and the market became highly optimistic – it was a noticeable year with a very high number of IPOs, where 80% of the business was unprofitable1. Still, it is unfair to say that the market was “unreasonable” with today’s data. It is easy to conclude that the numbers were indicative of significant loss, but the strategy of ignoring 2021 probably would’ve missed the following opportunities as well (and way beyond that):

Stepping back, because of the intangible aspects of software, we can probably find real examples to justify any predictions of financial statements. For instance, if I were to write the same article last year to be cautious of optimism, I would’ve used examples of Groupon, Yelp, or LendingClub. So, quantitative analysis isn’t enough to evaluate software businesses; we need to dig deeper to understand dynamics and plan for the future. Indeed, a successful investment was never solely about reading quantitative metrics, even in Benjamin Graham’s era of the 1930s. So, we’d rather accept valuation as an everlasting challenge that we will never fully master. ∎

Investment students need only two well-taught courses - How to Value a Business, and How to Think About Market Prices.