I wanted to record my thinking process in 2013 occasionally, but it is already almost over without much results. It is better late than never, so I’m attempting at least an annual report here. First, let’s see a chart below from Forbes’ article summarizing notable value changes: How You Should Have Spent $100 in 2013 . 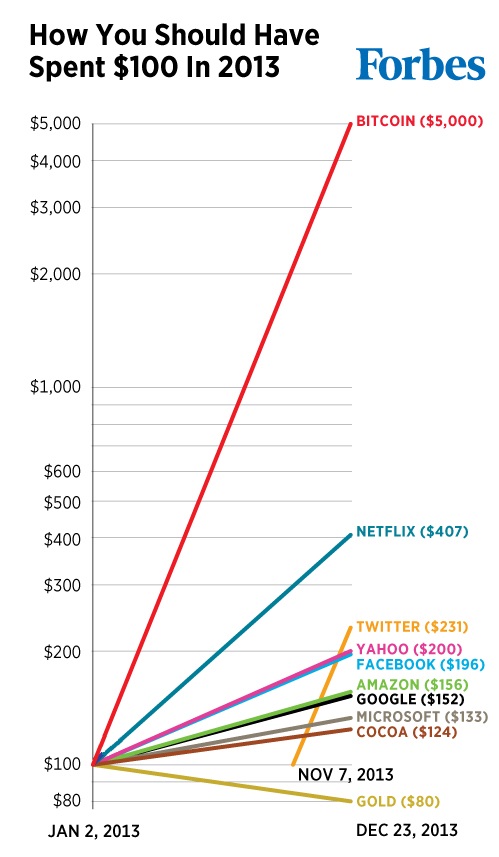 This year, I was exclusively looking at the tech stocks, and the chart shows that that choice would’ve rewarded handsomely regardless of specific selection – I didn’t think much of digital currencies like BitCoin or LiteCoin. Below is my watchlist that has a few more information for this year:1 2

Considering KOSPI didn’t move much this year, my choice to invest in U.S. tech companies was a primary reason for gains. However, I also kept a few principles that may had some contributions:

Because of the first principle, I deeply cared about who the CEO was. Incompetent CEOs don’t understand innovations at all. In contrast, excellent CEOs show aspiring visions to allure exceptional talents and run the company to keep them working at full potential. For example, Amazon’s Drone and Google’s Boston Dynamics were fascinating for world-class workers in robotics. Yahoo! is also paying more than aggressively to get people they want.3

Because of the second principle, I made five transactions in total: I bought TSLA twice, sold once, and bought YHOO twice. Considering my minimal cash, I think it was a reasonable number. I didn’t bother to check prices for months when I was busy.4

Now, what would I do in 2014? First, the market seems to move faster than I expect. For example, Twitter was rumored to be public at $11B , but it had already passed the $40B mark. So the movement seems a bit over-hyped (and 2013 gain is potentially pure over-excitement.) Nevertheless, I’m still learning, so I will try to control my greed and stick to the principles I believe in.