Shareholder capitalism sounds like the foundation of the modern economy, but how does it work? Here’s my interpretation. First, corporations (artificial persons), along with individuals (natural persons), stand as a pillar of the system. As the name implies, they share similarities with real people. For example, they have the right to make contracts, accumulate wealth, incur debts, and the responsibilities to pay taxes. For most corporations, their shares represent ownership, and those owners are called shareholders. So, most simply, corporations aim at maximizing shareholders’ interests. Since it is infeasible to get consensus among shareholders on all the corporation decisions, there’s a system to approximate that process. The system primarily has two parts: the board of directors and the executives1. They work closely for the same goal, but the first seems to focus more on shareholders, while the executives care more about management. The chairman leads the first, and the CEO leads the latter. Then, each company can modify this basic structure. For example, Starbucks lets Howard Schultz play both the chairman and the CEO roles, and Apple has Tim Cook as the CEO and Arthur Levinson as the chairman.

Needless to say, corporations play critical roles in society. They hire employees, provide/consume goods, and pay taxes. Moreover, their ownerships, credits, and derivatives are traded in the financial market. As such, individuals continuously interact with corporations, and this deep relationship is so natural in the modern economy. To understand this relationship better, I think we can categorize the role of individuals as below:

Even though the picture is complicated, we still miss a crucial player: governments. Then, the whole picture becomes incomprehensible when we add different governments (possibly with different systems) and international corporations. To keep it simple, I’ll focus on the relationships between corporations and individuals here, assuming that governments play reasonable roles in running the system smoothly. Then, let’s go back to the previous statements that corporations exist for shareholders. Even for this simple goal, corporations still need to care about consumers to make sustainable profits. Going one more step, they cannot ignore employees as they are the ones to serve consumers. Thus, it is worthwhile for corporations to satisfy employees by providing adequate environments, investing in education, and rewarding good performance. In summary, corporations in shareholder capitalism are forced from three directions to serve shareholders, consumers, and employees. It isn’t easy, of course, so executives and the board typically get high compensation for their work. 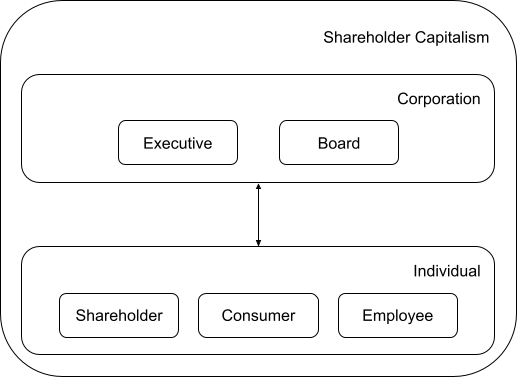 Those corporations compete with each other, and society can expect the followings:

However, there are natural forces in the opposite direction too. Corporations may deceive consumers and enjoy unwarranted profits. A small group of shareholders may privatize corporations to direct the earnings to themselves at the cost of other owners. Likewise, there are multiple ways (and real examples) for this system to fail small individuals. Thus, we need governments to manage the system to prohibit abuse. Moreover, it may make sense for governments to play more direct roles to compensate for the downsides of shareholder capitalism. For example, for successful corporations, it costs much more for new owners to bring the same level of ownership than existing shareholders. This barrier may hurt the dynamics of the modern economy if they persist, and it may make sense for governments to play challenging roles to keep the system running again.

Now, let’s see an example. Public corporations A and B decided to merge, but the condition looks unfriendly to A. It can still be the best outcome for A if its values were flaky and its board of directors worked hard to protect the interests of shareholders. Shareholders of A still deserve reasonable explanations of the conditions as the board is only the client for shareholders. To make the case more interesting, let’s say A’s board was in special relationships with B, and they could benefit from this deal at the cost of A’s shareholders. Moreover, the board benefits more the worse the conditions are for A. In real life, proving that the board is misbehaving is challenging because there’s no fixed formula for valuations. Even worse, the board may coerce executives and employees to spread damaging information about A to lower the value further. I mentioned above that corporations are forced from three dimensions to benefit individuals, but in this example, individuals can be abused by corporations from three different directions. First, shareholders couldn’t realize total gains from their ownership. Second, employees worked on uninteresting projects to spread misinformation irrelevant to the market. Last, consumers lost access to great products as corporations cared less about satisfying consumers and maximizing profits.

Survival of the fittest elegantly explains the dynamics of the biological ecosystem: the fittest to the environment is the one that thrives. The framework applies equally well to shareholder capitalism. When the system willingly allows the above examples, corporations that can abuse individuals most efficiently will thrive. Corporations will compete to benefit influential minorities, not to provide the best service to consumers. Shareholders will speculate on those relationships to realize gains, not long-term profitability of the business. Naturally, the consumer market suffers from poor services, and employees find their work unsatisfying. However, a country is not a closed system. When a neighboring country runs this system smoothly, individuals will gradually move as consumers, employees, and shareholders. And this spiral will be very hard to reverse. I think shareholder capitalism is one of the greatest inventions of humanity to benefit individuals, but it requires attention and cares to run the system smoothly. ∎